We use cookies for an optimal shopping experience. For example, language settings and items in the shopping cart are saved on your computer. By clicking on 'Accept', you revocably agree at any time that we and third-party services used in the shop, use cookies and similar technologies to optimize the website, to create anonymized user profiles and to display interest-based advertising.

"THW Berlin Friedrichshain-Kreuzberg" plays it safe: during operations and when storing material. New cantilever racks from TOPREGAL now in continuous use

Jan Bachmann is used to long working days. The communication electronics technician from Berlin travels a lot in Brandenburg and Mecklenburg-Western Pomerania on business. Only not on Mondays. Then he makes his way to Berlin on time. Because every Monday between 7 and 10 p.m. the "duty day / evening" of the Federal Agency for Technical Relief (THW in German) takes place on the grounds of a former Prussian barracks near the station "Südkreuz". Also, or rather because it is an honorary position, punctuality is very important for him. On the one hand he is an honorary train driver of the "Technisches Hilfswerk" (in short and following: THW) and on the other hand he is a member and chairman of the "THW Helfervereinigung Friedrichshain-Kreuzberg e.V." By the way, the 668 local branches of the THW in Germany also work according to this organisational construct. The advantage is that the individual support associations can decide independently about raised donations and support funds. This is also often necessary because the funds provided by the Federal Agency are capped by the budget of the Federal Ministry of the Interior, Building and Homeland Security (BMI).

Archive picture: Self-collection by THW in the TOPREGAL central warehouse in Filderstadt

A vivid example of this were the shelves on which THW Friedrichshain-Kreuzberg stores tree trunks, logs and wooden beams in various lengths and thicknesses. The wood stored here is used in an emergency to support ceilings, for example, which are in acute danger of collapsing. As in the case of private companies, THW's racks must also be regularly checked for safety. For the THW as a federal institution, the same safety-relevant regulations for the protection of the emergency services in their daily work and during training apply. Since the approximately 25-year-old racks were getting on in years, no more assembly or use instructions were available, and at the same time the garage floor was renewed in the course of the partial renovation, the warehouse logistics had to be renewed at the beginning of 2018.

"What to do if new shelves have to be bought but the budget is not enough", Jan Bachmann asked himself. Together with Michael Hößler, the local representative of the THW local branch in Berlin Friedrichshain-Kreuzberg, he researched four shelf manufacturers or retailers on the Internet. He wrote them a friendly e-mail with reference to the limited financial means of the helpers' association and the hope for a concession in price. With TOPREGAL in Filderstadt the inquiry from Berlin achieved the hoped for effect connected with the mutual promise the supply and the final structure editorialally to accompany and with TOPREGAL on the web page publish. Furthermore, THW has taken over the entire construction of the shelves on its own initiative with its helpers. "We receive so many requests from voluntary organisations or THW local associations that we cannot respond to each of them. However, if it is feasible, as is the case with THW, we try to find a suitable solution together with the customer". Natalia Czajecka, team leader sales with TOPREGAL informs. 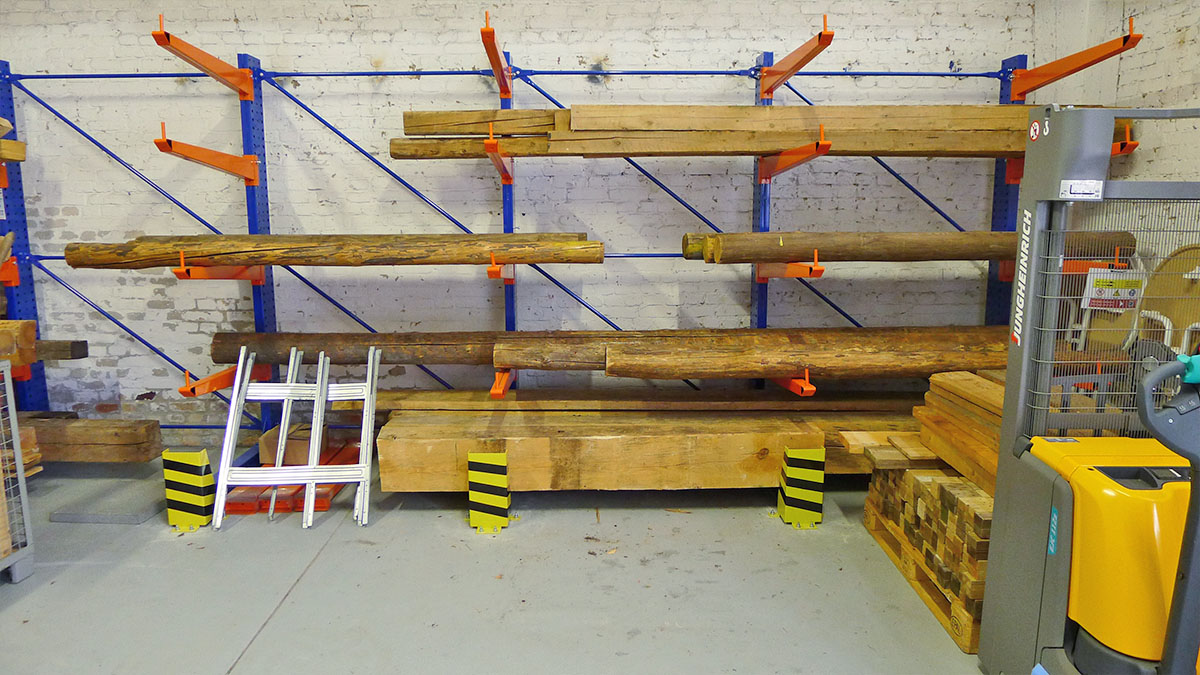 The Federal Agency for Technical Relief (THW) - With more than 80,000 volunteers, the THW, which has existed since 1950, is the federal government's civil defence and disaster control agency and is unique in its structure worldwide. In addition to the 99% of the contributors, the volunteer task forces, 1% of THW members work full-time in the THW administration. As a federal agency based in Bonn, the THW is subordinated to the Federal Ministry of the Interior, for Construction and Homeland Affairs. During spectacular operations in Germany, the THW usually supports the police and fire brigade in the background, whereas the THW is increasingly noticed by the population during foreign missions. In the Berlin Friedrichshain-Kreuzberg local branch, about 80 volunteer "helpers" between 10 and 70 years of age are engaged. www.thw.de www.thw-ofrk.de